Prevent Blindness has declared Nov. 14-20, 2021 as the second annual “Thyroid Eye Disease Awareness (TED) Week.” As part of this initiative, Prevent Blindness will be promoting its TED resources including the dedicated webpage, fact sheets in English and Spanish, and posting a series of graphics on its social media channels, including Facebook, Twitter and Instagram. 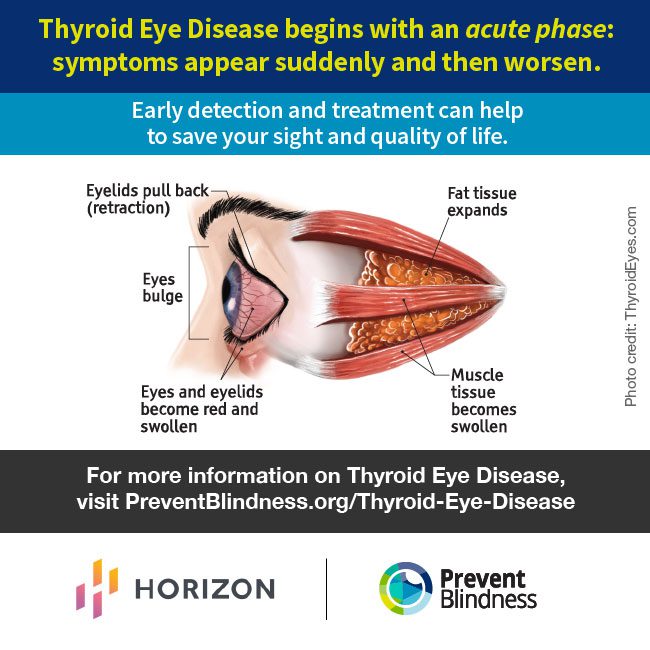 Thyroid Eye Disease (TED), sometimes called Graves’ ophthalmopathy or Graves’ Eye Disease, is an autoimmune disease in which the immune system causes inflammation and swelling and stimulates the production of muscle tissue and fat behind the eye. While TED often occurs in people living with hyperthyroidism or Graves’ disease, TED is a distinct disease requiring separate treatment.

According to the National Organization for Rare Disorders, TED affects more women than men, although men are more likely to have a severe form of the disease. Those who have a family member with the disease or a family member with an autoimmune disease are at a greater risk of developing the TED, and it is more likely to occur during middle age. The estimated prevalence of thyroid eye disease is estimated to be 16 per 100,000 women in the general population, and 2.9 per 100,000 men in the general population.

TED has a variety of symptoms including:

Because TED may affect both vision and physical appearance, some TED patients may experience changes to their mental health, including depression, anxiety and self-consciousness. Prevent Blindness strongly advises patients with TED and their caregivers to talk to their doctor about any changes to their emotional well-being, to seek out support groups for those who have TED, and to avoid isolation by staying connected with family and friends.

“As with so many eye diseases and conditions, the earlier TED is diagnosed and treated, the greater the chance to save sight,” said Jeff Todd, president and CEO of Prevent Blindness. “We encourage everyone to talk to their doctor about the best ways to protect their sight and find treatments that are right for them.”