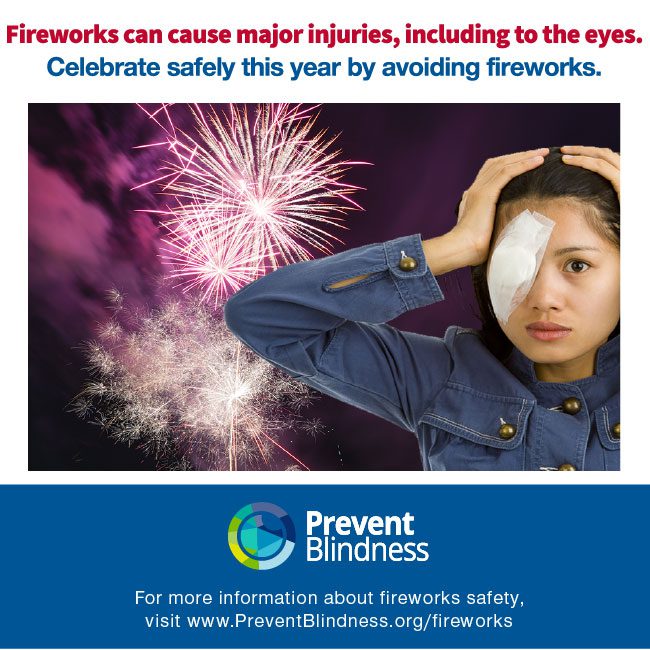 The American Pyrotechnics Association states that 49 states plus the District of Columbia allow some or all types of consumer fireworks. Illinois and Vermont allow only wire or wood stick sparklers and other novelty items. Massachusetts bans all consumer fireworks.

The most recent annual report from the United States Consumer Product Safety Commission (CPSC) found that an estimated 10,300 fireworks-related injuries were treated in U.S. hospital emergency departments during the 1-month period between June 21-July 21, 2020.  The report also found that during that time period:

Additionally, children younger than 15 years of age accounted for 18% of the estimated injuries. In fact, there were an estimated 400 injuries to small children, ages 0-4, due to sparklers alone. According to the Illinois Fire Safety Alliance, sparklers can burn at up to 1,800 degrees.

Prevent Blindness has declared 2022 as the Year of Children’s Vision in an effort to increase awareness and education on the importance of saving sight for kids. The group asks parents to talk to their children about the dangers of using fireworks and to encourage other holiday activities, such as making 4th of July-themed crafts, to celebrate the holiday safely.

A recent report found that bystanders account for 40%–50% of those injured by fireworks, meaning adults and children must be vigilant, even when just observing firework displays. Prevent Blindness urges the public to attend only authorized public fireworks displays conducted by licensed operators, but be aware that even professional displays can be dangerous.

“Independence Day should be spent with family and friends, not in an emergency room,” said Jeff Todd, president and CEO of Prevent Blindness. “By celebrating the holiday safely, without consumer fireworks, lasting, wonderful memories can be made for years to come.”

Find out more about the dangers of fireworks, or call Prevent Blindness at (800) 331-2020 for more information.