Prevent Blindness Encourages Everyone to Take a Screen Time-Out

In response to increased virtual activity during the coronavirus pandemic, Prevent Blindness has launched Screen Time-Out, an awareness campaign to encourage Americans, especially parents of young children, to introduce regular screen breaks into their daily routines.

During work, school and even personal downtime, people spend as much as 12 hours a day in front of a digital screen. This amount of screen time exacerbates the risk of digital eye strain, also known as computer vision syndrome, especially for children whose eyes are still developing. Symptoms may include tired, burning or itching eyes, dry eyes, blurred vision and/or headache. The risk of digital eye strain has recently risen to a mounting level in the United States during the coronavirus pandemic, with 53 percent of respondents in a recent survey feeling burnout on screens over the last few months. 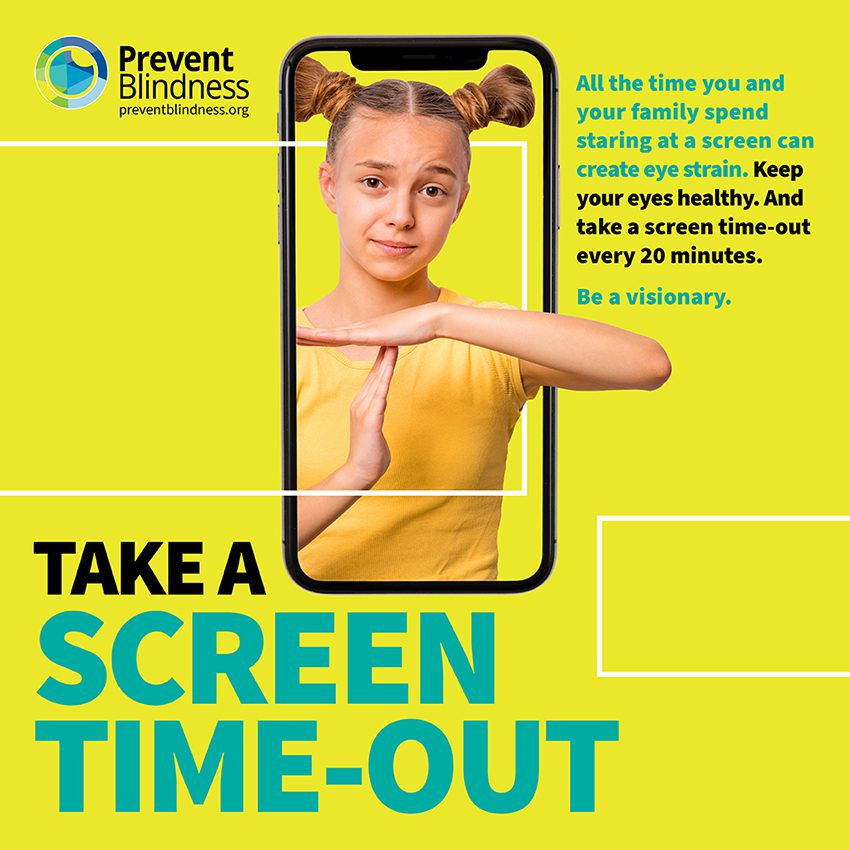 “At Prevent Blindness, we are concerned about people spending more and more time in front of our screens,” said Jeff Todd, president and CEO of Prevent Blindness. “As an organization dedicated to ensuring everyone has a lifetime of healthy vision, the Screen Time-Out campaign is meant to educate people and reduce the risk of eye strain, starting with the youngest among us.”

The Screen Time-Out campaign will live on social media – Facebook, Instagram and Pinterest – where device users are already spending a lot of their recreational screen time.

According to a recent survey of American eyecare professionals, 64 percent of respondents have seen an increase in patients having issues due to more screen time. Sixty-eight percent said they have seen those issues in both children and adults.

“Digital eye strain has been a rising modern threat to people of all ages, and it is linked to myriad issues, including eye development and nearsightedness,” said Dr. Linda Chous, pediatric optometrist. “It is important now more than ever to be mindful of how much time we spend with screens and take steps to reduce the impact of digital eye strain.”

To reduce eye strain, Prevent Blindness recommends children and adults take regular breaks using the 20-20-20 rule: every 20 minutes, shift eyes away from the screen to look at an object at least 20 feet away for at least 20 seconds.

Other tips to avoid eye strain from the American Academy of Ophthalmology include:

Download a copy of the Screen Time Out press release.