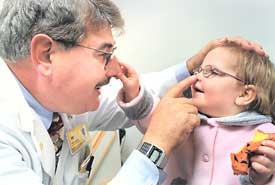 Scientists and parents have worked together to identify a new genetic disease that causes neurologic, muscle, eye and liver problems in children. The discovery was unusually fast thanks to a combination of modern gene-sequencing techniques, social media and old-fashioned detective work.

One important clue was that affected children cry without making tears.

The new disease, called NGLY1 deficiency, is described in a paper that will be published online in Genetics in Medicine, the journal of the American College of Medical Genetics and Genomics. The paper describes eight children with mutations in the gene coding for N-glycanase 1, an enzyme that recycles defective products from a cellular assembly line. Children who lack this enzyme have varying degrees of movement disorders, including a characteristic combination of muscle contractions that causes abnormal tremulous movements. They also have developmental delays and liver problems. The gene defect is so rare that until recently, finding eight affected individuals would have taken several years; instead, the children were found in a matter of months.

This represents a complete change in the way we're going about clinical medicine, said Gregory Enns, MB, ChB, associate professor of genetics in pediatrics at the Stanford University School of Medicine and co-lead author of the new paper. Gene-sequencing tools have sped the translation of findings between clinical and lab settings; in addition, scientists around the globe and lay people are contributing to the discovery process.

This is happening so quickly because of the integration of the families with the researchers, and because so many people are coming at this from so many angles, said Enns, who is also a geneticist at Lucile Packard Children's Hospital Stanford and Stanford Children's Health. Other co-authors of the paper come from 12 research institutions across the United States, Canada, Germany and the United Kingdom.

The relief of finally getting a diagnosis is just life-changing, said Kristen Wilsey, mother of Grace Wilsey, 4, who was the second American patient, and among the first few in the world, to be identified with NGLY1 deficiency. Grace's diagnosis was a pivotal moment not just for her San Francisco Bay Area family but also for defining the new disease, since the comparison of multiple patients allowed researchers to confirm that the disease existed.

The enzyme that is missing in NGLY1-deficiency patients is normally found in cells throughout the body. N-glycanase 1 helps break down incorrectly shaped proteins so their components can be reused. The new research confirmed that children with a defective NGLY1 gene do not make the N-glycanase enzyme. The researchers also observed that the children's liver biopsies contained an amorphous substance, which they suspected was an accumulation of protein that did not get recycled.

Before Grace's diagnosis at age 3, Kristen Wilsey and her husband, Matt, searched across the country for answers to their daughter's liver dysfunction, developmental delays and other neurologic problems. When her combination of symptoms did not fit any known disease, teams at Stanford and Baylor College of Medicine sequenced her genome. They came up with eight genes to investigate, including NGLY1, and began investigating the genes in order of the likelihood that they might explain Grace's disease. NGLY1 was at the end of the list.

The first to solve the puzzle was Matthew Bainbridge, PhD, a postdoctoral associate in the Human Genome Sequencing Center at Baylor who shares lead authorship of the paper. Bainbridge read in the medical literature of another child, studied at Duke University, whose caregivers there suspected his unusual symptoms were tied to an NGLY1 gene defect. But without a second patient for comparison, they weren't sure.

As part of his detective work, Bainbridge emailed Kristen Wilsey to ask if Grace produced tears when she cried. Wilsey replied that although Grace's eyes were moist, she never really made tears. Bainbridge wrote back, I think I have it.

My heart jumped out of my chest, Wilsey said. The first patient identified with NGLY1 deficiency, it turned out, also did not make tears, and the same characteristic has since been observed in seven of the eight children with NGLY1 gene defects whom the researchers have identified.

Biochemical testing confirmed that Grace lacks the N-glycanase 1 enzyme. With that finding, the medical teams began comparing the early patients' symptoms in detail. But modern communication added a twist: The father of the first patient had blogged about his son's diagnostic odyssey. The Wilseys connected with them by email and began collaborating to help the researchers understand the new disease. Matt Wilsey and the father who wrote the blog, Matthew Might, have co-authored an editorial for Genetics in Medicine that will accompany the paper, describing how families' engagement in social media can speed scientific discovery. The journal also has produced a podcast featuring the two fathers.

Social media helps parents coordinate and share ideas, said Matt Wilsey, noting that parents can also connect scientists at different institutions to one another or to resources the researchers have not considered tapping. Using blogs and other online forums also helps scientists avoid a pitfall of the scientific publication process, he added: Scientists can share their failures, getting their negative results 'out there' so others don't reinvent the wheel.

Recently, the researchers, patients and families met for a scientific symposium to plan future studies of the disease. Seeing all these kids, and observing that they had similar movements, affect – and even looked quite similar in some cases – solidified that this is real, Enns said. It was quite amazing.

But the symposium underscored how much remains to be done. We don't know how NGLY1 deficiency is causing the neurological findings seen in the children we're treating, Enns said. Once the gene defect is found, that's when the work really begins.

At present, teams from around the world are examining many models of the disease – including stem cells, mice, fruit flies and zebrafish – to figure out how the gene defect is linked to the children's symptoms and to look for drug targets that could be developed into new therapies.

Before we had a diagnosis, we always had the fear of the bottom dropping out, Matt Wilsey said. Without knowing exactly what was wrong, he and his wife constantly worried that Grace might suddenly deteriorate. In that situation, you're always on the defensive; you can't enjoy parenthood, he said.

With a diagnosis, we can start working on a cure or a way to alleviate some of Grace's symptoms, Kristen Wilsey said. It's hard to describe that feeling. When we got the news, we were so excited that neither of us could sleep.